Around Hawaii, Food and Restaurants
5 Comments

I haven’t posted anything in a while and I’ve truly missed it. This is a spot where I can share anything I want. No expectations.
So after a short hiatus, my first post is about saimin and ramen. I’ve always loved these noodle soups and can pretty much eat them every day. When I was a kid, my grandmother took me to see samurai movies. These were a huge passion – my childhood fantasies were set in medieval Japan. The culture spoke to me a very deep way.
After the movies, we’d go to Likelike Drive Inn, an old local hangout for saimin. We’d order two bowls – a large and a child’s portion. I ate the large one. The time I spent with my grandmother was precious. I still miss her.
The last time I was at Likelike Drive Inn, I was disappointed that the broth was so salty. Saimin usually has a broth made of pork and/or dried shrimp. The broth should be clear, not oily and briny, not salty. Then there are the egg noodles that need to be cooked before they go into the broth and served immediately. There is nothing worse to the saimin connoisseur than mushy noodles. Condiments are placed on top. The most common are char siu (Chinese five spice flavored pork), kamaboko (fish cake – usually the pink and white kind), scallions (just the green part), scrambled egg and spam – all thinly sliced. 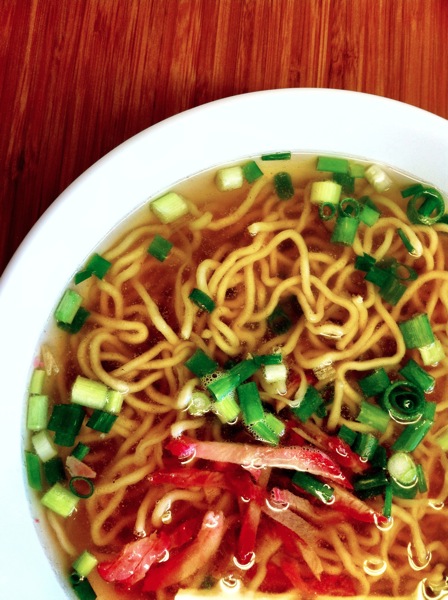 My current favorite saimin place is Palace Saimin, an old establishment in Kalihi. No frills there…just saimin in different sizes and few options and barbeque meat sticks. Saimin has it’s roots in China and Japan and is the invention of plantation workers making do with what was available and integrating with their neighbors in other camps. It’s a Hawaiian hybrid dish with deep roots. Yum!

If you have a favorite saimin place, please share it in comments so that I can check it out. I’m always on the lookout!

(Sidenote: I would love to get my hands on the first issue of Lucky Peach magazine which featured ramen)